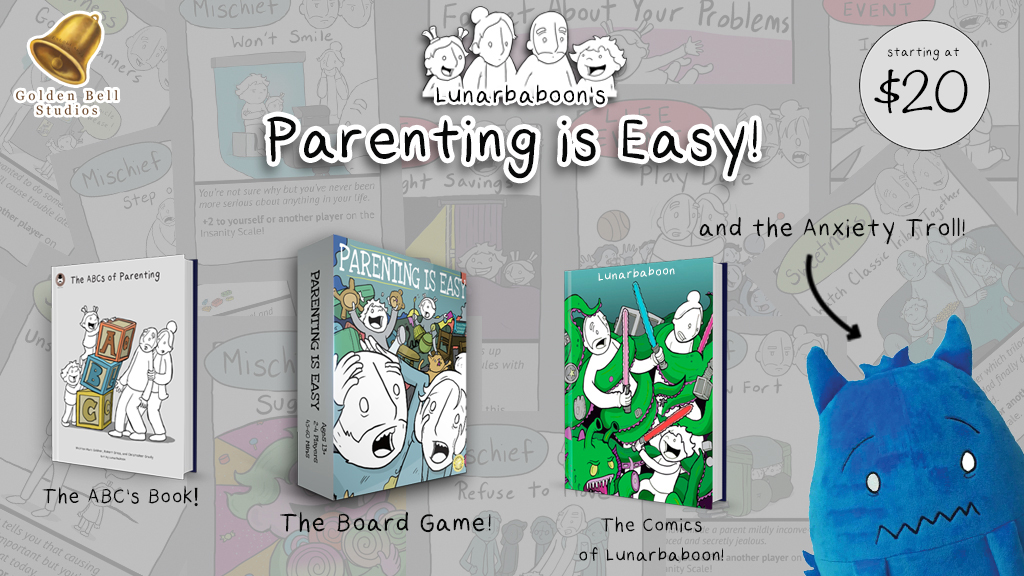 Lunarbaboon returns for a 3rd time on Kickstarter with a Board Game, Anxiety Troll Plush, Book & Comics to make parenting a lot easier!

Latest Updates from Our Project:

Hey all you Baboons!

A few big important things we wanted to discuss.

First, it looks like about half of you have so far filled out the BackerKit Survey. Around 600 or so haven't yet, so do that as soon as you can! We had one question keep cropping up so we wanted to answer it here...it's about the Vacation & Neighbors Expansion and the Anxiety Troll Add-On Expansions. These two expansions were listed as add-ons for the $100,000 stretch goal as add-ons. They are available ONLY on BackerKit for Kickstarter backers! The Anxiety Troll expansion are going to be rougly 50+ cards from Guest Artists that will enhance the game adding a new Anxiety Troll mechanic that you won't want to miss. The Vacation & Neighbors expansion will add new locations (outside of your chaotic house) such as a Doctor's Office, the Supermarket, a beach in a far off land, and even your Neighbors house that is being destroyed by your little rascals. You'll be able to add these expansion on in backerkit. If you already filled out your survey you can still log back into BackerKit or click the link here to edit your pledge and we'll get that in for you!

Next on the agenda, the decision for the Anxiety Troll plush. We have decided to go with what the majority of backers have voted for. And that is to keep the Anxiety Troll's arm's stitched to his body. IF anyone doesn't like that and wants them to flop around then a simple clip with a scissor will allow them to go wild and crazy all over the place! We heard loud and clear that velcro wasn't the way to go so thank you for all of the great feedback!

And last, for the backer's vote! Oh wait that was the last point...guess we'll just show off some more of the art that has been coming in for the add-on expansions you can get!

Art by Cale Grim of Things in Squares

OH! One more thing!!! We launched our first licensed product with Garfield! We have an awesome slate of games lined up and they'll be delivering at the same time as Lunarbaboon. Check out the campaign this is a real throwback to childhood!

Get your games and comics today at: https://www.kickstarter.com/projects/831309281/garfield?ref=bi0uik

Hey all you Baboons!

The time has finally come to claim your rewards and pledges! We've started sending out the BackerKit surveys. There is a required "Smoke Test" that is sent to 5% of people within the first 24 hours, which we've just sent out moments ago. Barring any major changes to the survey, we will be sending out the rest by this time tomorrow.

If anyone has ANY questions please don't hesitate to message BackerKit Support, or shoot us a message if you don't happen to receive the link by this time tomorrow! You will have up until 30 days prior to shipping to still change your address, so don't worry!

In other news, we have another campaign running that we just launched and would love for you guys to check it out. Maybe you'll see some similarities, both products will be shipping out at the same time which is very exciting. Our first major license, Garfield!

Thanks again everyone for all your support. We will be sending Anxiety Troll production pictures in the next update as those are already on the line ready to be sewed & tagged!

Thank you SO MUCH everyone for a truly amazing campaign! We owe it to all you wonderful backers for making these dream-like products into a reality so thank you :)

WIth that, we bring some good news. We are WAY AHEAD of schedule with the Anxiety Troll plush! We have just placed the order this past week and the factory has already ordered the material and has started the official manufacturing process. The only thing that's left is to discuss how we want the Anxiety Troll's hands. We have a couple weeks to decide as that is the second to last part of the plush process (next to the hang tag). So... we come to all of you with a question some choices if you will.

How do you want the Anxiety Troll's hands?!

These two options both have their ups and downs. The third option of course is to just do nothing with the hands, and leave them dangling down as it is. However we felt the appeal of being able to hug and snuggle the troll by his arms and hold him like a backpack was just too cool! Let us know what you think in the comments below!

We also have unlocked a BUNCH of Social Stretch goals that we'll be showcasing options to improve the game shortly. Check out this link for 10 pictures of a baby sleeping! It came in with just minutes prior to the end of the campaign!!! Thanks Janet!

We are right now hard at work on completing the writing and editorial for the ABC's of Parenting. We had met with Chris and after a lot of feedback want to improve the last writing of the book. Rather than just having the letters on each page. We realized an awesome contrast not only to the art, would be the words. So while the left side shows the Kid's perspective, the text on that page will the parents talking to the kids about Art for example (A is for Art remember), then on the right side of the page, we'll see the parent's perspective in the art but the kids will be funnily interrupting the parents! We hope this addition to the book will give you even more immersion to Lunarbaboon!

Lastly, it was super awesome getting a message from a fan of Lunarbaboon. She had drawn some fan art and we spoke to her, after a few messages we decided that it would be really cool to have an up and coming artist as part of Lunarbaboon's first game.

We also decided to have at least one guest artist card that would be a guest comic rather than just an illustration, Jon Esparza delivered as always with this awesome piece!

Thanks once again everyone for all your support. We are all set up on BackerKit and the pledge manager surveys will be coming out this time next week once all the money is collected. If your pledge has failed you have a few hours to still get this corrected to get your rewards. Once the survey comes, you'll be able to add all the things you so desire!

In the meantime, remember to share the campaign and show people where they can still pre-order their new favorite Lunarbaboon products. Lots more news is on the way :D

We said the update would be the last one for a few days but we couldn't resist. Just a few minutes ago Chris finished up a comic for the last few hours of the campaign to share with all of you, as did Dave McElfatrick of Cyanide and Happiness! Check these out!

But we all know what happens to good things. They eventually get torn apart, die, and are forgotten...

A message from Lunarbaboon, "Only a few hours left! Thanks to everyone for their continued support of the comic. Special thanks to Golden Bell for working around the clock to make this Kickstarter a great one."

Thanks again to all our amazing backers for making this shared dream a reality!

All the best with lots of love,
Marc, Rachel, Rob and the entire Golden Bell Team

P.S. Don't forget to share the link with all your friends on social media :)

Look what came in the mail today?! Just in time for the end of the campaign :)

And we just had a live stream, check out the multiple live streams we just did unboxing!

There is ONLY 10 Hours Left before the campaign for Lunarbaboon is over! We can't believe how fast the time flew but there will be a lot more things coming up for Golden Bell and Lunarbaboon's partnership in the many fruitful years to come! :)

For now though? There is still an opportunity to up your pledge to the $99 Tier that will get you EVERYTHING! From the Parenting is Easy Board Game, to the Anxiety Troll Plush, all the way to The ABC's of Parenting, and of course the Lunarbaboon comics, how could you resist? This deal won't last forever and is super discounted from what it'll be at later! There is also the SIGNED tier at $127 which will come with a sketch from all of us :D

We've also updated the main campaign image to reflect the new comics from Lunarbaboon that are now available! Please share to all your friends so we can get over our final stretch goal of $100,000 and if you were thinking of changing tiers now is the time to do it! We have a lot of awesome things in store that you really aren't going to want to miss. We will be providing monthly updates going forward on all the progress we're making! There are going to be some awesome things happening leading to the Holidays!

And a special image to go along with it if you prefer this over the campaign image ;)

As everyone knows we were doing social stretch goals. One of those such goals was Fan Art of Lunarbaboon and the Anxiety Troll. As we were scrolling through Instagram I noticed one from, Priyanka Sahoo, who was greatly inspired by Lunarbaboon. We reached out to her and asked her it she'd like to participate as a guest artist. It's a work in progress so far but it's coming along together really nicely. What's a comic called Lunarbaboon without some Aliens on the Moon am I right? There will be more to come in the months leading up to production!

And here's one last friendly reminder of how to "Add-on" to your pledge!

Thanks again to all you amazing backers and for all the support you've given throughout this campaign. We are excited to see what the future together with bring. All the best,